I’m excited to announce I went a little crazy last year and agreed to be part of a hot new series set in New Orleans… in the popular MC (Motorcycle Club) genre. This was about as far from anything I’ve ever written before – I don’t think I’ve ever written anything close to an alpha hero, nor used some of the words that I did in this book. But when my good writing friends Megan Crane, Jackie Ashenden and Maisey Yates talked about writing a book set in New Orleans I wanted in.

I went to New Orleans last year for the Romantic Times Convention and although the convention was fabulous, I fell head over heels for the French Quarter – its gothic beauty, it’s quirky shops and characters. Not to mention the ghost tours – man I could have gone on a hundred of them! Seriously it is now one of my favourite places in the world andI can’t wait to go back there one day. 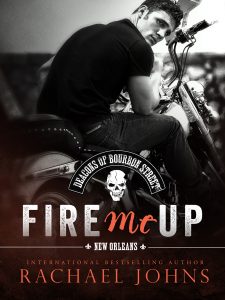 Anyway, I digress, the book. Mine is the second in the series called THE DEACONS OF BOURBON STREET about four ex-bikers who return to town after the death of their estranged leader. Some are happy to be back, but my hero Travis is most definitely not. He’s moved on from this world and although he still loves riding his bike (and is still littered with tattoos), he’s quite happy (or so he thinks) with his new life as a security analyst (aka professional computer hacker) far away from NOLA!

It was a challenge writing this book, it certainly stretched my creative muscles and although it might not be your typical MC book I hope those of you who love MC books will still enjoy it and I hope my lovely rural romance readers might enjoy something a little bit different from me as well. Never fear I’ll still be writing the other types of books as well 🙂

So, without further ado, I give you Travis (who stars on the cover) and Billie’s blurb in FIRE ME UP:

Can a scorching affair with a bohemian beauty tame a motorcycle man with a dark side? Rachael Johns takes the wheel in the sexy series co-written with Megan Crane, Jackie Ashenden, and Maisey Yates.

Travis “Cash” Sinclair values only two things from his days with the Deacons of Bourbon Street: his prized Harley Davidson and the man who gave it to him. But now Priest Lombard is gone, and Cash has inherited the Deacons’ clubhouse—not to mentions its unexpected tenant. She’s exactly the type of woman he tries to avoid: all incense and art, with a sharp tongue that promises trouble. So why does Cash want to push aside those flowing skirts and lose himself between her legs?

Billie Taylor fled a bad marriage to start a new life among the grit and glamour of the French Quarter. She refuses to let another man distract her from her dreams, especially an outlaw biker with nothing to offer except hot sex and an eviction notice. Cash is dangerous, with an untamed streak he tries desperately to conceal. He drives Billie wild, sending her too close to the edge for her own good. And she won’t fall under his spell—or into his bed—without a fight.

FIRE ME UP is available for pre-order at Amazon, Amazon Au, Kobo, Google Play and Barnes and Noble.