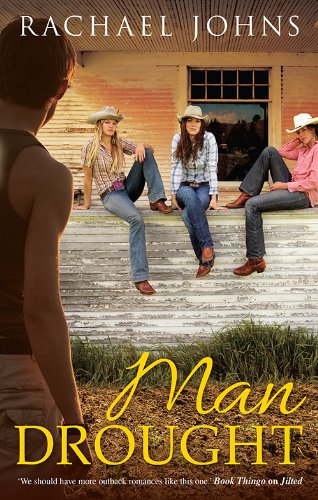 Imogen Bates moved to the small rural town of Gibson’s Find to start a new life for herself after the death of her husband. Tired of being haunted by the painful memories of her old life, Imogen set her last remaining hopes on the little town and, in particular, pouring her heart and savings into restoring The Majestic Hotel to its former glory. But while the female-starved town might be glad to see a young woman move in, not everyone is happy about Imogen’s arrival.

Sheep and crop farmer Gibson Black once dreamed of having the kind of family his grandfather reminisces about, but he’s learnt not to dream anymore. Living in the mostly male town suits Gibson down to the ground…and he won’t have anyone – least of all a hot redhead from the city – change a thing.

“I thought the writing very accomplished, in many ways each of the main elements of the story – plot, character and setting, are much stronger in Man Drought than in Jilted. I enjoyed John’s humour and the way in which she captures the natural rhythm of Australian speech in her dialogue. The pacing is just right and all the threads lead to a happy and satisfying conclusion.Man Drought is a heartwarming, well crafted contemporary romance with appealing characters and engaging story and Rachael Johns is proving herself to be one of my favourite rural romance novelists.” ~ Shelleyrae from BookdOut Blog

“Rachael Johns is quickly becoming one of my favourite authors. I didn’t know I loved rural romance until I read her previous novel Jilted, and it’s not just the gorgeous outback settings that draw me into her books, it’s the wonderful characters…” ~ Lauren on Goodreads

“Man Drought is a much stronger book than Jilted and even though I really did love Jilted, I see where Man Drought has benefited from being a second novel. There’s much more confidence in the story and the characters and as a reader, seeing each book improve and become better lends so well to anticipating the next one – which I already am!” ~ Bree from 1Girl2ManyBooks blog